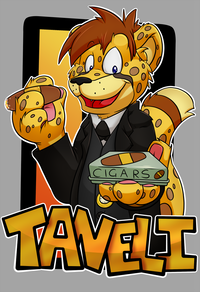 Taneli Gepardi (born October 18, 1987) is a British furry from Yorkshire, U.K. Originally from the small town of Beverley, East Yorkshire, he resides in the city of Leeds, West Yorkshire where he regularly frequents the local furmeets and impromptu pub gatherings, or "pubbages".

Taneli has been an active member of the furry fandom since early 2005, after being linked to the British furry forum UKFur. He attended his very first furmeet in March, 2007, after being dragged along by his first furry friend, Matt Lion.

Taneli originally joined the fandom as a feral tiger under the name Tiikeri (the Finnish word for tiger), but changed his species and name in early 2008 after he felt that the character did not completely suit his real-life build and characteristics. He became an anthropomorphic cheetahnamed Taneli Gepardi. Thos name is also from the Finnish language, and translates to "Daniel Cheetah", Daniel being Taneli's real-life first name.

Taneli is a huge sports fan. His favourite sport is Rugby League and his team is Hull FC.

By profession, Taneli works as a librarian.