You mean the Talk section? According to the history, the article Zig Zag was first created on Aug 14 (it has been through several revisions since then). --mwalimu 05:05, 29 Nov 2005 (UTC)

Zig is also the main crush of many a lonely fanfic writers yiff fest stories, in which she always falls in love and makes love with said characters fursona.

Perhaps it does. But there were other changes made in today's edits (and reverted out) which were unquestionably vandalism. This to my mind casts doubt on the credibility of anything they changed.
See also the "Controversy" section of Zig Zag the Story. --mwalimu 16:10, 6 April 2006 (UTC)

Might it be an idea to mention the Zig Zag fursuit and who owns it? --Korrok

Well, the ZigZag fursuit appeared on eMule (that's actually why I came to this article. I've never even read Sabrina online). But I'm not sure where in the article it should go, or even what liscence it has. Kodak Disposable 21:46, 14 March 2007 (UTC) 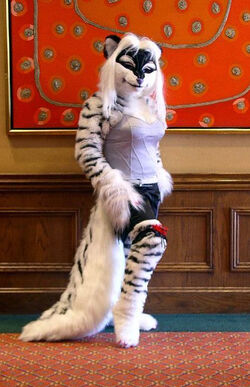 There's strong evidence Eric Kern made and/or wears the fursuit, with videos and mentions of Zig Zag on the website and Livejournal, but I haven't found any part of the website confirming or denying her participation in creating the fursuit or wearing the fursuit, and while reading her entire Livejournal is impractical, I havn't found definitive evidence so far there either. In addition, I'm not in contact with her, nor would I want to contact her just for a Wikipedia article. So, in short, I think answering questions about the fursuit is probably better left to someone else besides me :-/. Kodak Disposable 00:54, 19 March 2007 (UTC)

Anyway, I was looking at the GFDL policy, and I think that would apply here. Wikifur's more or less a reference site like a textbook, and it's not for profit anyway, so I think it'll be alright, so I labled it with GFDL. Only trouble now is that there's so little info about it, I can only add a sentence or two about it on the article. If anyone has other info, as always feel free to add. Kodak Disposable 21:40, 10 May 2007 (UTC)

Does Zig Zag appear in "Aesop’s Foibles"? I am unable to find mention of this particular comic/story via Google. Perneseblue 14:28, 29 February 2008 (UTC)

She appeared in this picture [[1]] from Cracked.com.