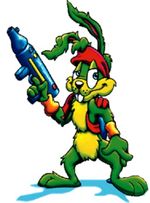 Compare this image to the screenshot shown in the Jazz Jackrabbit 2 Wikipedia entry.

To clarify - there is no correlation between the Jack strip and the Jazz Jackrabbit video game. I've removed the link, according. I'll create a Jazz Jackrabbit entry shortly. Carl Fox 02:25, 26 Aug 2005 (UTC)
I thought it was a little off. No need to delete the image as you can use it there. I may see about contacting the Jack forum, asking if people want to contribute to the article. -Nidonocu - talk

I think there are a few more cameos in Jack than just Uncle Kage...I know I've seen Sue Deer, Gene Catlow & Cotton, Vinci & Arty, AND Trixi & Tet! I think there were some appearances by Rafe, Pink, Silverblue, and Miss Mab, but I don't have time/patience to check. And there are a few others, I just don't know their names.—The preceding unsigned comment was added by 206.57.89.177 (talk • contribs) .

Jack the webcomic and Jack the character[edit]

The comic is in indefinite hiatus for RL reasons. The current comic strip displays this message from the artist on a piece of what looks like poster board and captured via camera.

Most of the content is ripped directly from Wikipedia[edit]

I just spent the last hour or so updating all the comic page URLs across Wikipedia and WikiFur (can't on TVTropes, no account) to the new host at http://jackrabbit.thecomicseries.com/ and noticed a disturbing fact that nearly all the content of the major sections of this article are ripped directly world-for-word (barring minor style changes) from the Wikipedia page. I would expect the editors of this article to be more familiar with the anthropomorphic subject matter than the average wikipedia editor and would be able to go into more detail than simply copy-and-pasting.