Tales of the Morphing Period 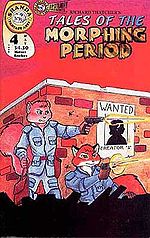 Tales of the Morphing Period is a one-shot comic book created by Richard Thatcher and published by Shanda Fantasy Arts under their SFA Spotlight banner in May 1999.

It is set in a world very close to our own time, where an unknown scientist nicknamed "Creator S" unleashes a virus which begins to change humans into anthropomorphic creatures. The "Morphing Period" is divided into two stages, the "Fast Morph" and the "Slow Morph". The stories are for the most part slice of life musings on how this affects the everyday person. Thatcher has charts and data in his books to answer questions and aid contributors.

ToTMP is presented as an anthology series, with a common thread of stories around Richard, an anthropomorphic red squirrel and his family. Other, dissimilar stories are presented as non-sequential chapters as part of the general world setting. Most of the stories are written by Thatcher himself.

In recent years, Thatcher began working with artist & writer Steve Carter and various others on the third installment of Morphing Period.