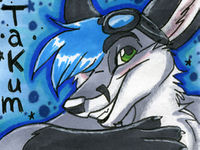 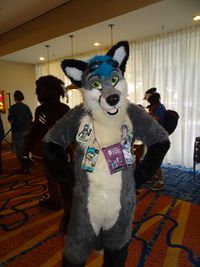 Fursuit of Takum Fox at Megaplex 2013.

Takum has been in the furry fandom since early 2006.

Takum can be found on Second Life, where his avatar is named Takum Shinji. He has not been very active there since June, 2013, but does log in from time to time.

Takum's fursona is a Gray Fox with gray fur, and black socks on both his legs and arms, with pink pawpads. He also has a white underside, green eyes, blue head fur, and a white-tipped tail.

Takum is usually seen wearing goggles over his head, but he sometimes can also be seen wearing DJ headphones around his neck, or a bandanna.

In July, 2012, Takum had his fursuit constructed by Made Fur You, and debuted it at Megaplex XI.

In his spare time, Takum likes to play video games, especially rhythm-type games like Dance Dance Revolution and Beatmania IIDX. He also enjoys listening to various types of Electronic music including Trance, Psy-Trance, Ambient, Breaks, and Hardcore. He is also a DJ and a musician, producing tracks on FL Studio.