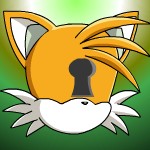 Tails Clock, also known as Tails Lock, is a furry fan, brony and Flash animator who lives in the United Kingdom.[1]

Tails joined the furry fandom at the age of 14, becoming obsessed with it. Tails created the Newgrounds crew The Furry Fanatics.[citation needed] This crew was not actually a flash group per se, but rather a place for the furry members of the current Newgrounds crews to gather and not fear being banned. He eventually left the group, starting up many others that all lasted a short amount of time too.

Although Tails Clock the fox character is used to represent Tails Clock himself, they have completely different personalities; tails is used much more like a character than an online alias. An attempt at a proper fursona was made with a turquoise duck, but this character was never used again after it's initial creation.[2] Years later the Tails Clock character was redesigned into an anthropomorphic design that resembles a humanoid fox with white trousers and blue shoes which is now the current fursona.

Tails is a former member of the Clock Crew and Lock Legion's Newgrounds Flash crews. He was banned from both of them for starting flame wars around the subject of furries. Most members in both crews dislike Tails because he is a furry, though some[who?] claim[citation needed] they hate furries because of Tails. Tails had been a member of the crews since July 26, 2005.[citation needed]