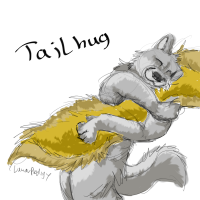 A tailhug is a physical hug given by wrapping one's tail one's virtual, fursuit or clipped-on tail around another's torso. (A hug with both arms and tails are sometimes called a "three-point hug".) In the case of large fursuit tails, one can hug one's own tail.

Also, one may show affection for a fellow furry, or simply appreciation for the quality of their tail, by hugging it, although proper etiquette or permission may be warranted.