This article is about the video game by TAILWorks. For other uses of Tail Tale, see Tail Tale 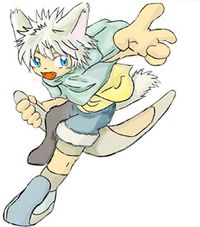 Tail Tale is a video game by TAILWorks. It appears to be a furry, Japanese language, browser-based game, currently in the beta stage.

(Update:11-03-12 by GamerMouseElite) It does not, however, appear to come with any sort of translation (Not even subtitles!). So unless you can understand japanese, enjoy being a bit clueless as to what the characters are actually saying. So no plot line for you. Other than that, it seems to be a fairly straight-forward game. You play as what appears to be your typical, japanese cat-boy (some people consider cat-girls/boys to be furries. I, personally, think that "furry" means completely anthro.) who's flying through the sky on the back of a little dragon that's smaller than the actual boy, while there seems to be a bunch of cutesy-looking monsters flying at you, which you get rid of by throwing a big boomerang at them. I can only understand one japanese word (the word for "Damn it!", Thank you anime ^^)so I can't really tell you what's going on other than what I can see. Hopefully, someone who actually understands japanese will come along and give you guys better information.