This article is about the video game by Circus. For other uses of Tail Tale, see Tail Tale 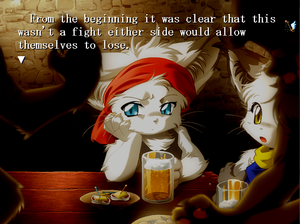 In a world consisting of floating continents, there exist races of kemono-s with different fur colours. One of the races is known as "Mao"﹝マオ族. At the east and the west edge of the continent, there are two villages- "Bastalk"(?)﹝バストーク and "Zarpat"(?)﹝ザパト﹞respectively.

The protagonist living in Bastalk, Rick, looks much forward to being able to build an aircraft (there are none in that civilization) in order to explore a new world. On a very day, while Rick is picking herbs for healing his sick younger brother, Nap, he crossed paths with a girl living in Zarpat, Run. And the life of Rick is going to be changed forever after this encounter... 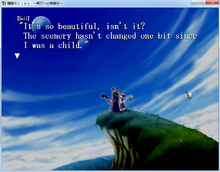