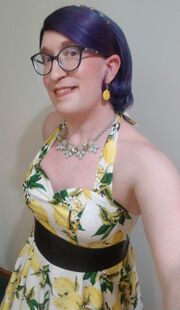 Autumn dressed for a wedding in July 2019.

Autumn is a non-binary trans woman and uses they/them (singular they) or she/her pronouns and Mx. as an honorific.

They work as a Systems Administrator in the web hosting industry, currently hold a Security+[2] certification, and also hold an inactive RHCE[3] certification.

They are best known in the furry community as a member of the transgender community, for managing the Unitarian Universalists group on Fur Affinity, and as an ordained as a minister by the Universal Life Church.

The word taigitsune (タイギツネ, pronounced /taɪ ˈgi ˌtsɯne/) is a linguistic blend of the Japanese words taiga, the borrowed English pronunciation of tiger (タイガー, pronounced /ˈtaɪ gə/) and kitsune, a mythical Japanese being (キツネ or 狐, /kitsɯne/). It refers to a species of tiger-kitsune hybrid.

Autumn has two taigitsune fursonas - symbolic of duality in human nature. Both have six tails, which represent the challenges overcome by and the follies experienced by Autumn in their life.

Satori (サトリ or 悟り, pronounced /sə ˈtɔri/) is so-named for the Buddhist concept of satori and is representative of the idealistic and gentle characteristics of Autumn's psyche.

Their fur is white with black stripes, and they have purple irises. A red five-pointed star adorns their left cheek. Their hair is iridescent in color and is cut short in the back with long bangs in the front that are typically dyed a shade of purple, blue, or green.

They are occasionally depicted as artificial constructs such as an android, stuffed animal, or goo creature.

As with Autumn, Satori should be referred to using they/their or she/her pronouns and Mx. where feasible.

Ikaris (イカリス, pronounced /ˈɪkərəs/) is a portmanteau of the Japanese word ikari, meaning "anger" or "hatred" (イカリ or 怒り, pronounced /ˈɪkərɪ/) and the name Icarus of Greek legend. They are so named for their propensity toward negative emotions and the consequences they bring.

They represent strength, empowerment, resilience, and are complementary in nature to Satori.

Their fur is black with white stripes, and they have red irises. A red crescent moon is emblazoned on their right cheek. Like Satori, their hair is also iridescent in color and is usually allowed to grow as long as possible.

They are occasionally depicted with ram horns, or as biological constructs such as a kaiju or other mythical monster.

Ruffles Theodore Faustus Münchausen (Ruffles or RTFM for short) is a fluffy, cartoony white wolf[4]. Ruffles was constructed by Isabella Price on Fur Affinity and debuted at Furry Fiesta 2011.

Harland Ambrose Roosevelt Emerson (Ambrose for short) is a realistic rabbit constructed by Dr. Morrow on Fur Affinity[5]. He debuted without a name, and was worn by his creator at Furry Fiesta 2011. Autumn later purchased him and gave him his name, which is based on Victorian steampunk fantasy.

Harland means "land of hares" or "hare's land" in Old English. Ambrose means "immortal" and is Greek in origin. Roosevelt means "field of roses" in Dutch. Lastly, Emerson was chosen because of Autumn's affinity for the early Unitarian minister Ralph Waldo Emerson.

He is most often seen in formal dress and carrying a churchwarden pipe. He is also notable for his case of Heterochromia iridum.