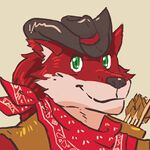 Tabyhunterwolf first joined the fandom since 2016 after he had discovered furry fandom through a Foxy's Day Out video uploaded by Vix N dwnq.

His fursona was created in 2017. The species is a wolf. He is coloured red and white fur. His facial features contain greens eyes, a brown nose, and a red tongue. He also wears a cowboy hat. He also equipped with special equipments such as a crossbow and a bow with bow holder on his back. Not only that, he also own 2 magnum guns.

Tabyhunterwolf is currently editing and planned to upload non-furry videos when as chatting with strangers and other furries on Omegle and Ome.tv.

Tabyhunterwolf usually uploads videos such as vlogs and documentary while attending cons. Secondly, he also make entertainment videos as different content on Youtube. He planned to make short furry films in the future.

He spends most of the free time to read articles on Wikipedia. He also read books such as novels, comics and documentaries. Other than that, he also watches youtubers, History Channel & Animal Planet Channel on Youtube.