Tabbicus is a member of the furry fandom. He was introduced to it by A.G. Silver Shepherd in December of 2005. He has been mated to Khortl Wolf since October of 2006.

Tabbicus Polydactyl Domesticus (commonly shortened to Tabbi or Tabs) has adopted the avatar of a polydactyl cat. His fur is royal blue with yellow markings. He has medium-length maroon hair and green eyes. He is usually depicted wearing his distinguishing purple sunglasses. Tabbicus has a fun-loving personality. He is very friendly and is always willing to lend an ear.

The main inspiration for the Tabbicus fursona is one of Tabbi's cats in real life, Paws. He is a polydactyl Maine Coon. Like the character, Paws has twenty-six toes.

The name, Tabbicus Domesticus, has no real-life significance. It was coined to sound like a taxonomic classification.

Tabbi's main colors (blue, gold, and maroon) were inspired by the colors of the Arizona State Flag.

Tabbicus has attended the following conventions:

Tabbicus is credited with coining the name Phoenix Furness. Before the convention idea was abandoned, he was a member of the convention's board and served in the capacity of Guest of Honor Relations. 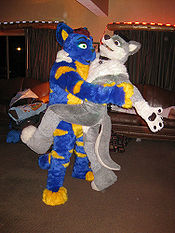 Tabbi in full fursuit dancing with Tzup
In 2007, Tabbi announced that he commissioned a custom partial fursuit, modeled after his fursona, from Lacy. The suit was completed in January 2008. The suit's first con appearance was FC08.

In January 2009, Tabbi made the down payment on a full fursuit for his character, also made by Lacy. The suit was completed in September 2009 and debuted at FURconsin 2009. 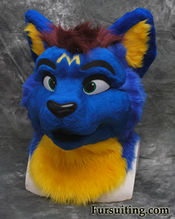 Version 3 of the head
In August 2012, at RMFC, Tabbi surprise debuted the third version of his fursuit head, once again made by Lacy.

Tabbicus lives in Phoenix, Arizona. He was born in 1989 in New York City. However, his family moved to Phoenix when he was only two months old, and he has lived there ever since.

Tabbi has a strong interest in The Disney Company, particularly Disney parks. He can often be heard quoting lines from his favorite attractions, such as The Haunted Mansion and Pirates of the Caribbean. He is also a fan of Disney's older live-action films, such as Bedknobs and Broomsticks and Song of the South.

Tabbi attended Arizona State University. He graduated in the Summer 2012 semester with a Bachelor of Science in Sociology.