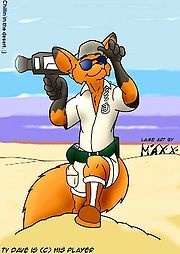 TVDave, aka David Neff, (January 14, 1953-March 30, 2003) was a journalist for a Texas broadcasting firm. While covering furry fandom for his journalism work, he became interested and joined Planetfurry. He is the author of a forever-incomplete story, Players, which is available from The Raccoon's Bookshelf.

He was working as a video consultant for an American contractor in Saudi Arabia when he died from complications arising from diabetes. A memorial dinner in his honor was held at Mephit Furmeet 2003.