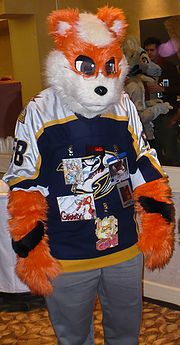 TORA's fursuit character is Growly, a dog based on the Pokémon "Growlithe".[2] The costume was built by Fallimar and debuted at Further Confusion 2008, where he appeared in an act in the masquerade. Since then, Growly has been seen in many convention pictures sporting his trademark peace sign.

Growly wears fully functional glasses, as he is near-sighted in real life. He sometimes wears one of two jerseys with the number 58 on it, which is Growlithe's Pokédex number in the older versions of the game.

When Penh introduced Growly at the Critterlympics at Further Confusion 2009 as part of the Rawhide Chews (the dog team), some people were confused. One even said, "That's not a dog!" to which Penh replied, "He's a... he's an honorary dog." [3] 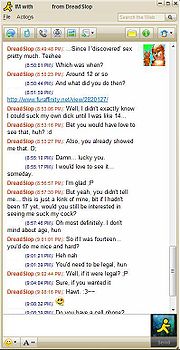 In 2000, TORA and his now ex-partner were contacted by a 14 year old teenage boy. According to TORA,[4] he sent a nude image of himself to the teen, who solicited TORA for sex but was turned down multiple times due to his age. However, in March 2001, TORA's older partner convinced him that they should meet up with the teen at a hotel.

TORA said that while he "refused to do anything," he made the mistake of sleeping in the same room, while his partner had sex with the teen without his knowledge.

Several months later, TORA found himself under arrest, facing numerous counts of sexual contact with the 14-year-old.[5] After months of objections to a guilty plea, he eventually plead "no contest" to one count of "lewd or lascivious acts with a child 14 or 15 years old," serving over two years of a three-year sentence, and is a registered sex offender from these charges.

On his release in April 2004 he spent another three years under parole restrictions, after which he rejoined the fandom.

TORA's criminal past was detailed in a thread on furry imageboard Lulz.net, with screenshots of AIM chatlogs detailing a sexual conversation between TORA and a 17 year-old boy. In the conversation, Tora states that he "does not mind" about age, and that he would engage in sexual activity with a boy 14 years old - but only if it were legal.

After this posting, Lulz.net users discovered additional information, including a listing on meganslaw.ca.gov and the LA Times article detailing his arrest.

TORA was banned from Fur Affinity on 23 September 2009. A conversation log[6] between TORA (Daniel Llamas) and The Dragoneer (Preyfar) was discovered in Google's cache, revealing that TORA had knowingly engaged in sexually-oriented conversation with minors via FA notes:

Since 2009, TORA had worked registration at Anthrocon, but people complained about his presence on the convention staff due to his past criminal convictions.[citation needed] The complaints were largely ignored by the Anthrocon board, including the con chairman itself, Uncle Kage.[citation needed] At this time, Tora does not longer volunteer at the event in any capacity and it has since been suggested he has been banned from Anthrocon as well.

TORA was arrested on July 10, 2019, by the Los Angeles Police Juvenile Division. The charges were California Penal Code 311.1 and 311.11 relating to possession and distribution of underage obscene material [7].

On November 6, 2019, he was offered a plea deal, which he pled "no contest" to one count, and the other two counts were dropped. He was sentenced to a "time served" sentence of 158 days in county jail and three years of summary probation. [8]