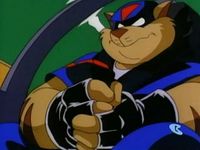 T-Bone at the controls of the Turbo Kat

T-Bone is a character from the Hanna-Barbera cartoon series SWAT Kats: The Radical Squadron. T-Bone's real name is Chance Furlong, who with his buddy Razor (real name: Jake Clawson), is a garage mechanic. Chance's real occupation, however, is a pilot for the team consisting of himself and Razor, aka the SWAT Kats.

Far brawnier than his partner, T-Bone also fancies himself somewhat of a ladies' kat. However, he generally has more success in the skies with his expert piloting skills. T-Bone enjoys watching Scaredy Kat,[1] much to Jake's dismay. His favorite pilot of all time is the Red Lynx.[2] He couldn't swim until he was partly mutated into a frog.[3]

T-Bone was once seduced by a female villain, Turmoil.[4] The episode was originally written to have Turmoil seduce Commander Feral, but was later changed to focus on T-Bone.

T-Bone once implemented a maneuver which involved evading a heat-seeking missile by shutting down the Turbokat's engines completely and launching a decoy missile. Razor said he hated the plan, the reason being that T-Bone had a hard time restarting the engines.[5]

While T-Bone and Razor have successfully managed to keep their real identities secret, they had two separate close calls where Commander Feral nearly learned who they really were. In one incident, Razor pretended to take Deputy Mayor Callie Briggs hostage before Feral could unmask the pair.[6] In the other, the Metallikats learned who the SWAT Kats were and offered the information to Feral in exchange for their freedom. Refusing to bargain, Feral instead used a neural neutralizer to deactivate the Metallikats.[7]