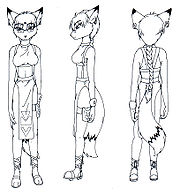 T'shelle Medina Ulan Kamin is a Kapar Master from Joshua Knode's Furry Fantasy novel The Shulamite. She is a middle-aged red coloured fox who is the master of the Medina School of Kaparjutsu. At the time of the Novel T'shelle's age is kept vague, though she seems to be in her early forties. Despite her age, T'shelle is considered a woman of great beauty and is known for her sexual appetite, prone to seducing acquaintances, though she has a strict rule about not being intimate his her students. There a few clues in the book about her being bisexual, but the author has denied that these were intentional.[citation needed]

As Revealed in the book, T'shelle was briefly married but her husband (who was unnamed) was murdered soon after by a rival Gunslinger. She's done her best to keep this hidden however, preferring to list her marital status as "Single" instead of "Widowed". T'shelle is the daughter of Don Alec Medina, a land don in her home town and is therefore considered low-level royalty though she prefers not to gain anything from the title. A practicing Tambrinist, T'shelle is deeply religious despite her violent lifestyle. T'shelle's Kapar are named "Parah" and "Selah". Aside from Kaparjutsu T'shelle runs a small vineyard, and brews her own wine. She also has dabbled in acupuncture and is known for having a beautiful singing voice.