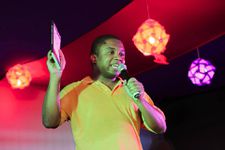 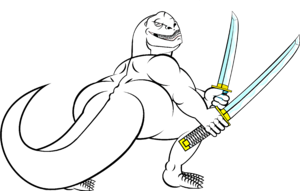 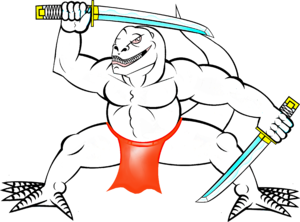 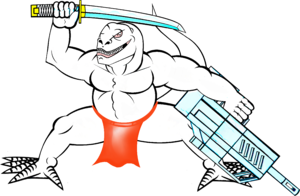 Swordsdragon's character is Lenin Grossekomodowaran. The anthropomorphic lizard, an albino Komodo dragon, is named after Vladimir Lenin, the leader of Russian Revolution of 1917 (despite being not actually related to his human namesake).

Lenin is a samurai-like warrior. He is the antithesis of superheroes like He-Man and Superman, actually being a ludicrously powerful supervillain.

Created in 1991, Lenin's layout was first inspired by Allo from Dinosaucers, subsequently being (increasingly) influenced by many supervillains from Japanese tokusatsu, as well as many other supervillains from anime series, not to mention many bosses from beat’em ups and many other games from early '90s onwards. One of Lenin's most famous inspirations was Freeza from Dragon Ball Z, whereas his very first model (clearly) mocked many of the Silver Saints from “Saint Seiya”.

In 2012, Lenin’s layout was ultimately upgraded to a samurai-like warrior. His iconic clothing is an ō-yoroi named El Garañon Macabro, which more resembles a lorica segmentata than actual samurai armor. Furthermore, his daisho is actually a pair of dotanuki and o-wakizashi swords, both with thicker blades than normal.

Being also proficient with firearms (military rifles, heavy weapons and high-tech guns), Lenin is famous to use a Smart Dragon assault rifle (or assault cannon) against his enemies.

All variants share the same bullpup design, in which the magazine is placed behind the trigger, firing 1000 rounds per minute in the primary function.

Furthermore, all models feature a follow lock-on mechanism, which is capable of tracking their targets (no matter how far they may stray from the crosshairs).

Given the plotline bound to the game mechanics (entirely adapted from Reptilia Squad RPG), the albino Komodo dragon is made even more murderous due to the symptoms of SNK Boss Syndrome, MK Walker, etc., thus having the entire deck stacked in his favor.

Lenin is dreadfully cruel, truculent and destructive, likely to butcher anyone who disrespects the Reptilian Code of Honor. Furthermore, the albino Komodo dragon is notably disrespectful and (enormously) foul-mouthed towards his enemies. Despite being amoral, sadistic and bloodthirsty, the giant lizard follows an unbreakable code of honor, which is similar to the First Law of Robotics towards his brethren (reptilians, inhumans, reptiles and sympathizers); in addition, he is extremely respectful and friendly towards them, displaying care for anyone who follows the same code of honor.

Being buffed to Giant Mode (even for a limited interval of time), Lenin greatly increases his muscle mass (nonetheless without lowering his speed), becoming greatly engorged in contrast to his usual frame.

Mega-Lenin's clothing (Bloodstained Bandages) consists of bandages wrapped around his body, arms, legs and most of the tail, as well as a basic loincloth (reminiscent of El Garañon Macabro). The clothing was clearly inspired by characters such as Makoto Shishio from "Rurouni Kenshin", as well as the Abominations from "F.E.A.R." and the mummy played by Christopher Lee (1922-2015), not to mention the nurses from "Silent Hill: Homecoming".

When dressing Bloodstained Bandages, the albino Komodo dragon moves in a (comically) disjointed manner, as if his articulations had been badly damaged.

Not surprisingly, the supervillain is made even more murderous due to his outwardly problematic movements, as the victims label him as a weakling and suffer the devastating consequences.