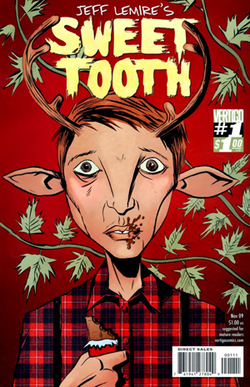 Sweet Tooth is an American comic book series written and drawn by Canadian Jeff Lemire and published by DC Comics' Vertigo imprint. Dubbed by some as "Mad Max meets Bambi",[1] it takes place in a mostly rural post-apocalyptic setting where some creatures are human/animal hybrids.

Although the story is initially set in Nebraska, the landscape is inspired by Lemire's past home of Essex County, Ontario.[2]

The series is collected into six trade paperbacks: