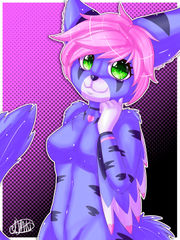 Sweet Tart joined the furry fandom back in 2015 on Facebook as a novice artist. She attends Anthrocon every year and interacts with a lot of suiters. She was featured in Kiba Wolf's most recent video from Anthrocon and was seen wearing Omnom Nomnomnom's first and original head, aka "Omnom Ver. 1".

Over the past 3 years, her Sona has grown and has gone through many changes - ranging from being a "Cat-coon" to a Winged Sciurus, undergoing a lot of design changes as well. Her art style now - compared to her 2015 art - has greatly improved and holds a unique yet simple style that is similar to a kemono type style.

Her fursona is a Winged Sciurus, a custom species created by Omnom Nomnomnom and Ino89777 of Skypro Costumes. Being the second of her kind to exist, she was announced by Omnom himself to be his official cousin - as is every Sciurus in the family.