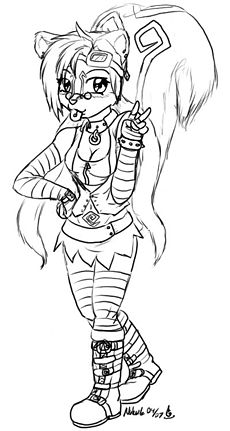 Swane Tallyn, also known as Razzberry and Swirlz, is a furry fan who frequent FurNet.

Swane was originally deemed Swain when she began to first go onto Furnet, having allowed to use a character created by Andy Dickman. She had became a pet to Rana, and soon a mate to Mal, though those two relationships blossomed only to die not long afterwards. Drama with Andy led a few of her friends to give her ideas, mainly to spite Andy, about creating a sister-like character to counterpart Swain, and thus Swane was born, the happy-go-lucky yet promiscuous proactive skunkette. Purple was chosen instead of blue, because that’s her player’s favorite color, and everything Swain was not, save for being loved, wanted, and a computer geek. After a few months, she became mated to Diomedes, a saluki, though he disappeared not long after that, which led her to pursue a spontaneous, then lengthy, relationship with Martin, an angelic otter. Before this, however, Swane had a multitude of pets, including a raccoonboi named Jriki and a hybrid squirrel-rabbit named Hg. Both were failures, however, Hg being disowned due to certain circumstances while Jriki basically disowned himself. Oddly enough, Martin and Swane were adopted, becoming legal brother and sister, though it didn’t change the relationship one bit, though it made Swane a bit jealous that he’d decided to impregnate their other adopted sibling, a bunny by the name of Minx, and subsequently have twins with her later on in the relationship. However, more drama, this time between Diomedes and Martin, led to a series of break-ups and make-ups, which eventually came to a stop as the three settled on having a three-way equal relationship. Months later, however, their happy little world feel apart with the leaving of Diomedes from the group. Nowadays, she's turned back to her old self, doing what, and whom, she pleases.

Swane is a typical skunkette, with a not-so-typical appearance, slim with enough curves to be viewed as attractive and not childishly thin. She stands at 5', not tall at all for her seventeen years of age, and weighs about 105 lbs. Her fur, instead of being the average black hue, is a vibrant, medium-tone lilac, her markings the usual white. Also, instead of stripes decorating her body, she sports lines ending in swirls, and plain swirls as well. Her tail is a bit over three feet and a half long, being a thick and bushy appendage. Hairstyle is unique as well, being a mix between a fauxhawk and pigtails. The length is, past her bottom, left pigtail violet, the other crimson, and her spiked and then cascading bangs a mixture of strawberry, crimson, and violet, violet dominating over the two. Her eyes are turquoise, and she's never seen without her little, magenta lenses. Her earrings, though they look like diamonds dangling from gold clips, they're actually wireless headphones, going with the mini mp3 player attached to her right wrist's glove, the device small and black with a heart-shaped, lime LCD screen and heart-shaped pink buttons. Black and orange-lenses goggles usually sit across her upper forehead. A collar with a built-in padlock somewhere on it is always around her neck, the key lost, but not searched for. She is never seen without some kind of gloves and matching thigh highs. She's one that loves bright, vibrant colors, and hates the annoying bits called undergarments, choosing to sport china-doll, uber-small skirts, large, wide belts, and form-fitting shirts that may be of any color, and maybe an over shirt, none of it matching much at all. Black, strapped and buckled boots almost-always cover her feet, shoe-less otherwise. Her tongue is pierced with a single stud, as well as her nipples, having small rings through them, and her clitoris, a matching ring there as well. She's a small B-, large A-cup.