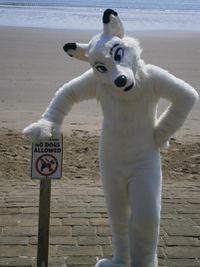 Sval, on the seafront in Scarborough, UK.

Sval (born October 24, 1985 in York, Yorkshire, United Kingdom,)[1] is a fursuiter who lives in Wirral, Merseyside.

Sval is an active member in the furry community, regularly attending meets across the UK. He formerly co-organized the York monthly mini meets, as well as Scarborough CabinCon.

Sval's fursona is a white arctic fox with black-tipped ears and tail.

Sval's fursuit was constructed by Lacy, and debuted at a York Fursuit Walk.[1] The character has become a topic of discussion locally,[clarify] after several sightings. This has given rise to a following of people who actively "hunt" him,[2] in addition to receiving a mention on one of the local radio stations.[citation needed]

Sval has attended several events in suit locally, invited under the alias of Snow Fox of York, including Fox Fest, Buskival and Martin House children's charity.

Sval is also a busker, a street performer, in his home city, licensed to perform in various locations around the city's historic centre.[3]

In June 2013, he was also involved in the Save Our Museum rally on behalf of the National Railway Museum in York.[4]

In July 2014, Sval took part in the Pets in the Park charity even in Hull to raise money for Pet Respect.[5]