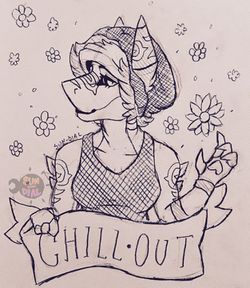 Her fursona is a female Garchomp (40%) + Megaladon (35%) + Tiger shark (25%) hybrid named Kanna, created on May 7th, 2014.[1] She is 7'03", works in the SWAT team, and is an undercover mercenary for the government when required. Her father was a police chief, so Kanna would follow under her father's work and help but he was worried about all the risks her daughter due to her many roles in law enforcement. While having a dangerous life working in law enforcement, she enjoys helping clean the streets of crime and making her father proud. Kanna lives in Japan and is in a relationship with a Lucario named Lu. Kanna is very loyal to Lu and doesn't like being drawn, shipped or touched in any way that would be suggestive.

Kanna really enjoys being with Lu, sushi, ice coffee, bubble tea, soft material, warm and comfortable environments, being spoiled, helping people who are willing to cooperate, and the colors, orange and pastel pink. Even though being very strict and honest, Kanna enjoys relaxing very often, working out during her free time and being with friends and family.

She does dislikes being far from Lu for too long, strangers, being touched, and anyone invading her personal space. She also doesn't like cold environments or people in general, and tends to never stay near anyone. She is very deliberate and does not like careless, ignorant people who are looking for trouble or attention. This is due to her being in the police force and SWAT law enforcement, being strict and very conscious.