Sukal was exposed to the concept of furries for a long time, due to his older brother, Helix Rushheart having been one and owning a fursuit.

Sukal joined the furry fandom as a dare during a conversation with his consent around October/November of 2016. Sukal was hesitant to the idea, but as he began to explore it, he quickly fell in love with it and created his fursona. The first official artwork of his fursona was drawn by Nsyse on December 21, 2016.

Sukal is currently level 15[2] on Furry Amino and is usually active everyday. 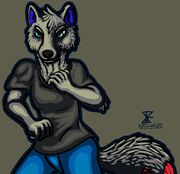 Sukal is his first and main fursona. His original name was supposed to be "Sakul" on his rough draft of his fursona, but it was changed due to the A and the U being switched sounding better. Sukal states that he doesn't really know what species of wolf Sukal really is, but he states it's most likely a Gray Wolf or a Tundra Wolf. Sukal's age is always constant to himself, due to him stating the Sukal would always be like myself.

Jay is his 5th fursona created and his second main. Jay is a Dharagami, a species created by TinyTomahawk. The reason why Jay is his second main fursona is because Sukal states he has a lot of fun drawing him and he states "It's the character I'm most proud making."

Ryu wasn't created by Sukal. It was given to him by Dialymayy (Formerly known as Moonlitsunder). When she came back to furry amino from a sudden disappearance, Sukal notice her being on the app and asked her about it. During the conversation, she offers he old fursona to Sukal due to her not wanting it anymore. Ryu is now one of Sukal's favorite fursonas.