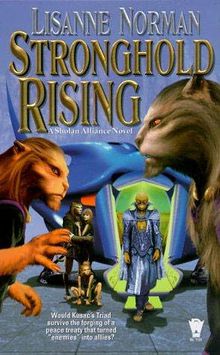 Stronghold Rising is the sixth book of the Sholan Alliance Series, written by Lisanne Norman. Although they are best classified as science fiction, they also include elements of fantasy and romance. Many of the main characters are telepaths, which is one of the major elements of the series.

The Primes are the upper class of the original Valtegan home world, pacifistic intellectuals who are unable to defend themselves from either their own warrior class - the Valtegans who have been making war on the entire galaxy - or any other species. To protect themselves the primes have made secret alliances with other races while concealing their own true identities and the location of their home world.

Now, after the ill-advised, accidental kidnapping of the vessel carrying Kusac, Carrie, and Kaid, the Primes have been forced to reveal themselves to the member of the Sholan Alliance. But in the midst of delicate diplomatic negotiations to create a new pact between the Sholan Alliance and the Primes, power struggles on both Shola and the Prime world threaten to jeopardize the treaty.

Still recovering from being tortured by a rogue Prime group, Kusac is about to set out on a secret mission of his own, a mission which could see him branded as a traitor to his own kind. And what he discovers could well lead to the overthrow of the Prime leadership and to the destruction of the delicate balance that is the only thing staving off interstellar war...