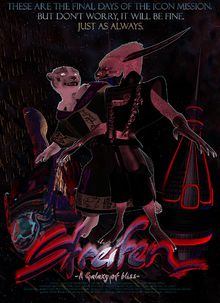 Streifen poster, and a DVD-cover

Streifen: A Galaxy of bliss is a motionpicture created and produced almost exclusively by Kyo. It had a premiere at Eurofurence 16, and it is a first part of the Streifen trilogy, with a sequel named Panzer o1: Wolfslayer currently in pre-production stage.

As written by the producer:

"Streifen" is a fairy tale of the heartless boy-god Imorgon, who has nothing to fear but his own destructive nature. It plays in a merciless universe full of strange creatures, and other animal-gods. A place where all ambitions turn into crusades. And Imorgon's crusade is for power... and love."[1] 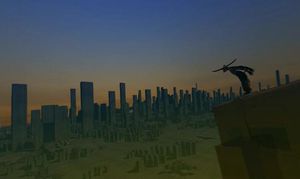 Majority of the plot is set in distant past (roughly 12 million years ago) on planet March 5 (also known as "Planet of Hope", or Phaeton), which is a fictional planet between Mars, and Jupiter. It is a planet full of seas, plains, deserts, numerous strange monolithic buildings, and levitating platforms. It is also a planet belonging to Hope, and Imorgon, two of the many Gods of Present Age, who wage a constant, and never-ending war with Gods of The Ancient.

The production of Streifen motionpicture began in mid 2004, after a sudden and intense burst of inspiration. Originally a solely one-man project was soon joined by Chama, Cheetah, Taibu, and Flutterby. At first, it was intended to be a sort of audio-book with self-drawn comic, but Cheetah proposed the idea of movie, which was accepted. The production enviroment of Streifen was an older XYZ-dimensional program which was later found very cumbersome in comparison with Blender, and Kyo regretted he did not found Blender earlier [2].

For 3 years work progressed on a version 1.0, and it was was more-or-less finished (no music, and sound effects), however never released, because (as Kyo puts it) "It failed to tell the story[3]. Furthermore the original video file is no longer in existence, and all that remains is a 2006 trailer of v1.0 which was presented at Eurofurence 12 (See trailers).

Is the Streifen as we know it. After the disenchantment with the previous version, the project was almost abandoned. But that did not came to pass, and with support and help from mentioned furs and others, the v2.0 was successfuly finished, and had its premiere on 3rd of September 2010 at Eurofurence 16. Two trailers are in existence (See trailers).

Is a sequel to Streifen: A galaxy of bliss, currently in pre-production. The plotline will deal with the ones responsible for Imorgons creation.. his parrents, and will be set on a planet Adam in a distant star system. The production enviroment of Panzer o1: Wolfslayer is Blender, and this time, many will participate in its creation.

This is a trailer to the Version 1.0 of the Streifen. It is all that is left from the original video.

These trailers are no longer available.