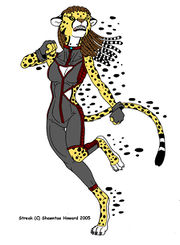 Streak is a character in Extinctioners, and made her first appearance in issue 15.

Growing up an orphaned, street child with her 2 brothers, Streak knows what it means to live the hard life. Eventually even her brothers abandoned her and upon discovering her powers of speed, used them to steal food to survive. Streak has the powers of incredible speed and when moving, it appears as if her very spots are coming off.