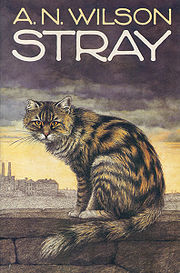 Stray is a novel by A. N. Wilson which was first published in 1987, by Walker Books. It is the fictional autobiography of an elderly tabby and white stray cat, as told to his "grandkitten".

A. N. Wilson's children's book The Tabitha Stories is about the daughter of Stray's main character.

One of the assumptions of the novel is that cats do not name themselves; as described by the main character: "we do not have names, any more than the Gods themselves have names. The habit of naming is a human one."[1]