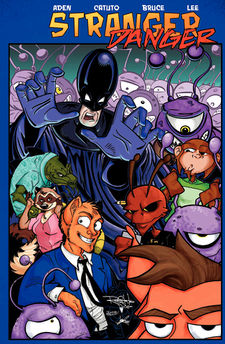 Stranger Danger is a science-fiction graphic novel with various anthropomorphic characters as the main protagonists.

Jeff Aden is the creator/writer. Art (including cover) by Ray Catuto, Junior Bruce and Jenn Lee. Lettering by Jenn Lee. Comic was published in 2010 by Arcana Studio.

Pencilling in comic seems to have been done by three people (each third of the comic looks it has been done by a different penciller).

Strange accidentally shoots down spaceship of some alien invaders. After the spaceship crashes a trooper informs the leader "ship engines will not work", "radio is down" and "we can never leave this planet". Leader of the spaceship declares first thing to do is to destroy the person who shot down the spaceship. A year later, the aliens locate Strange and attack

Alien leader is tall and pink-skinned. Most of the other aliens in spaceship are short, purple blobs with 2 legs and 2 antenna.