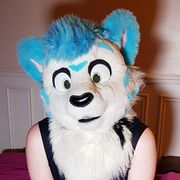 Stormy was the owner and head of public relations for the furry dating app Howlr, released on June 19, 2018. He was known for publicly distributing murrsuiting videos on Twitter.

On August 7, 2018, Stormy announced his retirement from the online furry fandom, deleting most of his social media accounts, which he immediately brought back online when he rejoined two months later on October 5, 2018.

As of 2020, he is involved with the furry video sharing site MurrTube, a fandom version of YouTube dedicated to sharing sexual videos of fursuiters.

Stormy's fursuit was built by Lacy. It debuted at Anthrocon 2014.

On August 7, 2018, Stormy publicly announced his retirement from Howlr (and his October 2018 fandom departure) due to controversy over his admission of being a zoophile and having confirmed he performed previous acts of bestiality in 2010.[1]