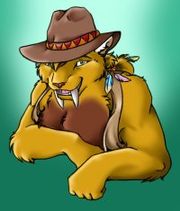 Stormcatcher is a furry writer. Originally from the Deep South region of the United States, he lives in the American Midwest.[1]

His fursona is a smilodon.

Stormcatcher is a member of the Furry Writers' Guild. His writings focus on male/male erotica, with characters that often have macho characteristics, which evoke his Southern background. His masculine characters are often flawed and sometimes outright unlikeable, but always charismatic.

Stormcatcher's works "Preventing Hypothermia", "The Humble Giver" and "A Helping Hand the Morning After" feature in FANG Volume 1, and his work has been featured in FANG Volume 2 as well.