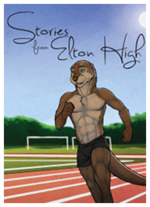 The cover of "Stories From Elton High"

Stories From Elton High is a furry novel by Alflor Aalto. It was published in 2010 on SoFurry and Fur Affinity and tells the story of Arden and Mark, an otter and wolf who fall in love during their senior year of high school. Unlike many such novels, coming out for Arden and Mark was actually the easy part. It's what comes after that will test that which they call love.

This novel was picked up by Rabbit Valley Comics and is being released in print for Further Confusion-2013. This release will include over 40,000 words of new content that will expand Arden's story even further. Both the cover art and the interior illustrations were done by Tsaiwolf

A sequel to Stories From Elton High was announced in January of 2011. Titled A Place Called College, it will continue the story of the two protagonists as they begin their freshman year of college. The Tentative release date of late 2012 / early 2013 has been set.