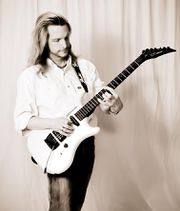 Steve Carter is an artist, writer, musician and photographer who lives in Texas, USA, who began sharing his work in the Elfquest fandom in the late eighties, emigrating to the furry fandom in the 1990s. He is a Milfur who served twenty years in the U.S. Air Force.

Following Richard Thatcher's death in January 2020, Steve inherited his art collection and, upon closing the estate, has been selling the works on Ebay and donating the monies to cancer-related charities. Chief among these is PanCan.org, which specializes in pancreatic cancer, the illness from which Thatcher died.