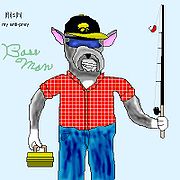 Steve Sandell (known in the Furry Fandom as "The BassMan") has, since 1999, been a role-player, occasional oekaki artist, podcaster, and fanfic author.

In real life he was born on October 31st, 1981 in Iowa City, Iowa as Devin Simmons. Adopted on February 14th, 1982, his legal name was changed to Steve Sandell and he has resided in Burlington, Iowa ever since his adoption. From 2003-2013, he traveled for a living working carnivals, though since November of 2013, has switched professions to taxi driving

The Furcadian Wrestling Federation was where BassMan first got his fame, when he had both wrestled and promoted for the guild from 1999 through 2012. As far as championships, he has twice held the Allegria and All-Terrain championships but never the Tag-Team or Furcadian World Championships. Other known members of his family on Furcadia include his father Maynard Von Schnauzer, Sr. (deceased), and his brothers Steve Von Schnauzer (AKA: Triple-S), and Phil Von Schnauzer (AKA: P.K. Rasslor, also deceased).

BassMan has recorded 13 BassCasts, which can be found on his Fur Affinity page

On the April 6th, 2008 episode of the Funday PawPet Show BassMan hosted a segment where everyone in the house tried the bottle-up game and did Subservients as a clown, though he was introduced as "Subservient Carny."

BassMan made a second appearance on January 11th, 2009, where he not only reprised his clown role, but also introduced his two pawpets: "Cizarny" (a Folkmanis Glen Terrier) and "Irwyn" (a Nanco alligator).

Characters created by The BassMan[edit]

Since 2010, BassMan's main fursona has been Rocco Racclown (Raccoon clown, or as he puts it, "Procyon Fossor"), inspired by 5 years he spent in the carnivals working as a dunk tank clown. He can often be silly, sometimes mischievous, even corruptible, but never really evil. He prefers being silly over scary.

Originally created for Road Rovers fanfics in 1999, Maynard served as BassMan's main fursona from 1999-2010. He is also considered the father of Rocco Racclown, generally the wiser and more civil of the two, but Rocco often tries to rival him.

Jav A. Junkie the Coffee Cat[edit]

Former mascot that would link his older webpages that no longer exist, has re-emerged recently in the Deep Thinkin' Perverts Oekaki board making occaisional art appearnaces and comments on certain images, Sort of as BassMan's "side kick" outside of Furcadia. As the name suggests, Jav A. Junkie is a total coffee addict, though he also is licensed to drive semis and loves Flying J Truck Stops more than any truck stop in the world because of how truckers get free coffee with every fill-up.

For Furcadia mainly (though he was once drawn on Deep Thinkin' Perverts for a special as Racer X, following up on a picture of BassMan as Speed Racer). Triple-S is BassMan's brother and is seen wrestling a lot more frequently than BassMan is, he is also a 2-time FWF Furcadian World Champion.

On BassMan's Fur Affinity page, he has been known to occasionally post pictures of Robin Marx, the name being based on a common inside joke with carnies (Robbin' Marks, Marks being what carnies call patrons of the midway). Despite having one eye and a few teeth missing, she still strives for sex appeal and is almost always seen carrying a Hi-Striker hammer (Hi-Striker being the classic carnival game where you swing a big hammer and try to ring the bell on top of the tower).