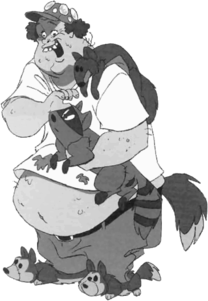 As with many current cultures and subcultures, the furry fandom has been subject to intense stereotyping.

Stereotypes can arise from virtually any facet of a group or demographic, depend partly on trends within the demographic, and are usually formed from the experiences and biases of the viewer or their friends. Some furry stereotypes have more than a grain of truth to them; however, many others fail to hold up under closer scrutiny of furry fans and culture.

Furry fandom's member demographics have traditionally intercrossed with other existing cultures and fandoms, such as science fiction, fantasy, anime, computing, and video gaming. As such, furry fans or furry artists are also often viewed (stereotyped) as fanboys, nerds and/or geeks at best, or a hairy, overweight (usually male), unwashed individual, living in his parents' basement while surfing for pornography on the Internet.

The particulars of the furry fandom 's culture may present what some furry outsiders would frequently consider strange, unusual, or bizarre take on the wider fantasy and funny animal genre. This has led to the stereotypes being thought up as sometimes more extreme than the typical fandom. For example, one list of some extra stereotypical points that have often been attached to furry fandom would paint most furries as:

These common portrayals of the fandom are based on several factors, such as the apparent larger than average percentage of individuals in it who are gay, bi, lesbian, or transsexual[citation needed] — a point which itself is debated within the fandom. Of course, the image of a social furry fan who has mostly mainstream, unremarkable interests and hobbies is not as titillating to sensationalism seekers in the general public, or groups such as 4Chan.

No matter how many fans there are who would fit the image of an unremarkable and less controversial Furry fan, there remain those who take part in less common activities, exhibit outrageous or unwise behavior, or provide a relatively rare fit with the most extreme stereotypes. These have, more often than not, been singled out and held up as symbolic of furry fandom.

Fans[who?] who are frustrated by stereotyping often believe that this is all it takes to prove the stereotype to "outsiders".[citation needed] Other furries[who?] have asserted that this fear is responsible for "witch hunts" within the furry community,[clarify][citation needed] including attempts to repress or drive away people perceived as undesirable before they become noticed.[citation needed]

Another view put forth by other Furry fans and some persons outside the fandom is that the enterprise of collecting, advertising, or reinforcing stereotypes is often carried out by individuals who would also fit a number of parallel stereotypes about genre fans, Internet users, and geek culturists. This view has led some to dismiss the entire topic, especially when it relates to online activities, as geeks battling geeks in a war to one-up each other with negative propaganda.

Stereotypes within the fandom, by the fandom[edit]

There are also stereotypes within the furry fandom itself. Some of these are external stereotypes, circulated by furry fans who wish to distance themselves from the unpopular image of furries or hold them up for criticism (see Skunk, Horrifying Look at the Furries, and the Burned Furs).

Other stereotypes are specific to the internal culture of the fandom. Since the furry genre places emphasis on animal characteristics, certain popular stereotypes are based on the favored species association of a given individual, especially among fans who have a personal furry or roleplay frequently. The stereotypical attributes that a certain creature bestows on a person may or may not be based on the accurate behavior of the real animal. In the instance of creatures that are mythological, to begin with, their attributed behavior might be inspired more by fandom conventions than traditional mythologies and stories. It is common for new furries to examine themselves to see where they fit within the list of supposed behaviors, whether it be for fun or to help them find the ideal species for their Fursona.

Many furries circulate and use species stereotypes as lighthearted cliches, with rare intents of causing genuine offense to other furries for their choice of species.

Some examples of species-related stereotypes include, but are not limited to: