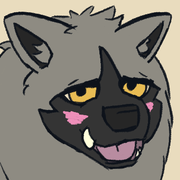 Stellarity, also known as Stella or Avoyt (born June 9, 1995), is a male animator, programmer and artist. He works as a motion graphics animator for broadcast television,[1] but he enjoys drawing, animating, and designing video games on his own time.

Stella dedicates a lot of his free time to the fandom, mostly by attending furry conventions and meetups, commissioning and supporting artists, as well as participating in the general online community. 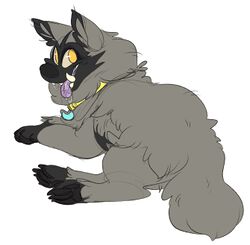 Stellarity was created between April and May of 2018 as Stella's Pokésona,[3] intended to be his second fursona, next to his self-named wolf fursona. However, Stella has since almost exclusively used Stellarity as is fursona, commissioning considerably more art of him than of his previous wolf fursona.

Stellarity, Stella's fursona, is occasionally recognized within the vore community. This is due in part to his frequent involvement within the community and in part to a large amount of vore-related art he has commissioned and created including this character. Most of this art also involves an Arcanine character, usually holding Stellarity inside of its mouth.

Stella made his wolf fursona before Stellarity, though it is unknown exactly when.

In addition to his fursonas, Stella has also designed several characters for use in his personal stories or imaginary worlds. Of these include a marble fox named Talia, a red fox named Naomi, and a wolf named Villo.

At conventions and meetups, Stella wears a partial fursuit of a colorful border collie named Pastel. He purchased the fursuit as a premade from its maker, ShortStack at Furry Weekend Atlanta 2018; Stella has since commissioned additional parts not initially included.

Stella is a dedicated fan of the Pokémon franchise and an avid collector of plush toys. Stella has accumulated over 200 plushies through his life. Over 90% of his collection consists of canid plush toys: wolves, foxes, and dogs. They range in size from several inches to several feet, with his largest plush, a light grey husky, measuring at almost ten feet long from nose to tail.

Additionally, Stella enjoys animating on his own, both in 2D and 3D. He usually chooses animal subjects to animate. His sketching style is relatively amateur, with his fur appearing somewhat spiky. Stella's animations are usually fast-paced and graphical. Ears on animal characters flop a lot when in motion.