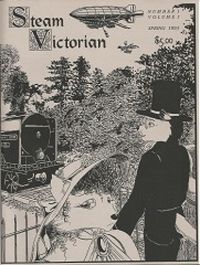 Steam Victorian was a fanzine which was devoted to furry steampunk fiction. Comprised of two issues, it was edited by Zjonni and published in 1993 by Greyfox Graphics & Publishing.[1]

Conrad Wong and Jordan Greywolf provided illustrations for their stories, whilst the other two stories were illustrated by Baron Engel. There were also spot illustrations by Will Faust, Dave Bryant, and "a few others".[2]

This issue featured a full-colour wrap-around cover by Baron Engel,[3] based on The War of the Worlds.[4] The original painting for the cover was subsequently auctioned at ConFurence 5, and had a minimum bid of $1,100.[4]