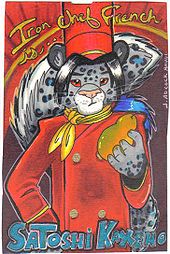 Stargel Husky, also known as Satoshi Kaxeno frydyr Aleixandre, (born February 1, 1986) is a fursuit maker and musician who lives in Ames, Iowa.[1] His personal fursuit is Stargel Husky. His fursona was Satoshi Kaxeno, a snow leopard furry with a slightly varied color scheme. Satoshi's shoulder-length headfur is royal blue while his bangs are usually dyed black. Though his eyes change color in accordance with his mood, they default at a piercing blood red. Like most snow leopards, he has spots, however, the interior of each spot is a light baby blue instead of the typical grey or brown.

In real life, Stargel attends Kansas State University. He is majoring in music education and has completed his minor in the Japanese language. He plans on attending culinary school after graduating with his bachelor's degree and plans on getting his master's in Composition. His hobbies include a variety of activities including listening to and writing music, cooking, Dance Dance Revolution, female impersonation, knitting, philosophy, and fursuiting.

Stargel has an extensive musical background and is active in many of the K-State musical ensembles, including the University Band, Concert Choir, the Marching Band, and the Collegium Musicum, for which he sometimes plays crumhorn. He has taken piano lessons since he was six years old and is proficient on many other instruments including voice, saxophone, oboe, and euphonium. He has written various small works for piano solo and instrumental quartets, and several larger works, including his Requiem Aeternam for Chorus and woodwind sextet, and a symphonic oratorio entitled The Creation, for wind symphony.