The franchise has expanded into various films, television series, video games, novels, and comic books, and with an estimated of over $10 billion in revenue, it is one of the most recognizable and highest-grossing media franchises of all time.

The franchise, produced by Norway Productions and Desilu Productions in Los Angeles, California, USA, began in September 1966 with Star Trek: The Original Series; It followed the voyages of the starship USS Enterprise, a space exploration vessel built by the United Federation of Planets in the 23rd century, on a mission:

Star Trek has been a cult phenomenon for decades, with the franchise spanning a wide range of spin-offs including games, figurines, novels, toys, and comics. Fans of the franchise are called Trekkies or Trekkers, with some of them able to speak in Klingon, a constructed language that was created for the franchise.

Star Trek is noted for its cultural influence beyond works of science fiction, and progressive civil-rights stances. The Original Series included one of the first multiracial casts on US television.[1] 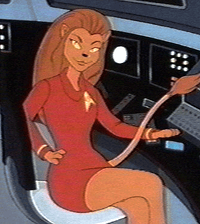 Star Trek has featured a number of alien races that are aesthetically similar to anthropomorphic animals. This includes the felinoid Caitians and Kzinti, as well as beta canon Eeiauoan and Sivaoans; dinosaur-based Saurians and Voth; boar-like Tellarites; and several reptilian races, including the Cardassians, Gorn, and Jem'Hadar.

The Xindi, introduced in Star Trek: Enterprise, is a collective of species that all evolved sentience simultaneously on the same planet and include aquatic, arboreal, reptilian, insectoid, primate and avian variations.

Star Trek has influenced a number of works produced by the furry fandom:

Additionally, there have been several instances of furries and Trekkies crossing over: