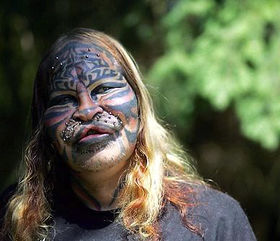 Dennis Avner (August 27, 1958[1] - November 5, 2012),[2] was a member of the furry fandom who was widely known as the Catman, though he preferred his chosen, spiritual name, Stalking Cat. Cat had spent considerable resources to surgically modify his body to express his feelings of personal affinity with the tigress.[3] He claimed that this was due to Huron traditions, but this was his personal belief, rather than traditional.[4][5]

Stalking Cat was born in Flint, Michigan, and grew up in Suttons Bay, Michigan U.S.A.[6] and from his earliest childhood he experienced a spiritual connection to all feline species, but particularly tigers.[6] Despite documentation to the contrary, Cat claimed that he grew up in a tribe and that at ten years old he was given the name "Cat" by a medicine man named Grey Cloud.[7]

In an interview later in life with Mark Dolan, Stalking Cat would comment that virtually all his childhood friends were adults, he did not relate to children his own age, and he spent a lot of that time in the woods.[8] He would also reveal that he never really knew his father, and claim that his step-father was a child molester. When asked if he was a victim of his step-father, Cat replied, "Not to a great extent, but enough. I mean, I've got some mental trauma that'll never go away."

Stalking Cat graduated from Oscoda High School in 1977,[9] and then served in the United States Navy as a Sonar Technician.[6]

After his discharge from the navy in 1980, Stalking Cat worked as a computer technician in San Diego, California, and it was at this time that he began his transformation project.[6]

After his transformation, Stalking Cat's appearance made him a celebrity, and he travelled to many different countries, appearing at live events and on television programs. He was represented by Hollywood talent agent Chuck Harris,[10] who typically negotiated a "minimum (of) $2,500 for a half day's work, up to $8,500".[11]

Through informal fur-friendly gatherings of science-fiction fans in Southern California, Stalking Cat met Tess the Red Pony and her husband Rick (a Boeing engineer), and moved north with them in 2005.[6]

In 2006, Stalking Cat and Tess were on a flight to Chicago to attend Midwest FurFest 2006, when they met Marla Carlson, Assistant Professor of Theatre at the University of Georgia.[6] Around this time, Stalking Cat was working on a deal to market a Stalking Cat action figure,[12] which did not materialize.[6]

On March 5, 2007, Cat and Tess visited Western Washington University as guest speakers in the "interdisciplinary monster’s class".[13] In April, Stalking Cat was interviewed by Professor Carlson for an article (Furry Cartography: Performing Species) that would be published in the Theatre Journal in 2011. At the time of the interview, he was living on Whidbey Island in Island County, Washington, with Tess and her husband. Fleet Wolf also lived in the house at that time. Prof Carlson's visit coincided with one of the household's monthly fur parties.[6]

Stalking Cat was doing some work on the shared house, and had unsuccessfully sought computer-related work in the Seattle area. Because "expenses and dynamics became unworkable for this interesting household", Cat was asked to move out later that Summer.[6]

After he left the Whidbey Island household, another friend from the furry fandom gave Stalking Cat a place to live in Tonopah, Nevada, and a job in housing renovation.[6]

In 2008, Stalking Cat would enter Guinness World Records[14] in the category of "most permanent transformations to look like an animal". This record was verified on the set of the Italian television show Lo show dei record on February 9, 2008.[15] In September the same year, Stalking Cat made a public appearance at the opening of the Ripley's Believe It Or Not! museum in London's Piccadilly Circus.[16][17]

By 2009, when Professor Carlson last spoke with Cat, his friend had moved on, work had dried up, and he was seeking clients as a home health aide.[6]

Around 2010, Stalking Cat was interviewed by Mark Dolan for an episode of his documentary series The World's... and Me. The episode, titled The World's Strangest Plastic Surgery and Me, aired on April 12, 2010. At this time, Cat was making a living from public appearances and part-time work as a home-help for the elderly.[18] During the interview, Stalking Cat indicated he was considering making money by selling his body to a museum to be displayed after his death.

Between May and July, 2010, a black and white marble bust of Stalking Cat featured at the White Cube (Hoxton Square) gallery in London, in an exhibition of the works of British artist Marc Quinn.[19]

Rumors of Stalking Cat's death began to circulate on Lulz.net on November 5, 2012. Oggywolf and bluecanary indicated in their Fur Affinity journals that they had contacted the Nye County Sheriff's office in Tonopah, Nevada, USA, who confirmed Stalking Cat's passing.[20][21]

Some mainstream news-sources contacted the Sheriff's office for verification beginning on November 13, 2012.[2] Other news outlets started carrying the news of his passing after that.[22][23][24][25]

Because they were easiest to arrange, Stalking Cat began his transformation by getting tattoos.[5][6] Initially he had fish-scale tattoos on his arms and legs due to a connection he felt with aquatic species like porpoises.[7] Years later he got tiger stripes tattooed on his face, and, as a result, "got more in touch with (his) totem and who (he really was)".[7]

Cat had his lip cleft to resemble the mouth of a cat, and had the septum of his nose relocated to give a more flat, cat-like profile. He had six stainless-steel mounts implanted on his forehead and eighteen piercings above his lip to which he could attach whiskers.

In the United States, it is illegal for a medical professional to alter someone's appearance beyond what society deems "normal",[26] so most of Cat's modifications were done by body-modification artist Steve Haworth, of Phoenix, Arizona. The same legal issues meant at least one procedure (injection of silicone) was done in Mexico.[7] Cat had to brave surgery without pain relief, because of U.S. laws stating that only qualified doctors are licensed to administer anaesthetic.[26]

Cat originally wanted to have his teeth reshaped and sharpened to look more cat-like, but his dentist refused to do the work.[7] As "years of drinking and drugging" had left his teeth in a poor state, Cat eventually had to have them fully removed and dentures fitted, and at that time his dentist helped him acquire dentures with cat fangs that were in excess of an inch long.

Stalking Cat grew his fingernails into long claws, which were strengthened by a layer of acrylic.[7] He wore contact lenses with slitted pupils, and sometimes an animatronic tail.

Cat's tail was built by Wolf Tail, of WolfTronix.[27] During Cat's phone-in interview on the Funday PawPet Show in May, 2002, he mentioned that he was looking for someone who could build an animatronic tail for him.[28] Techwolf, one of the viewers who was also in the show's IRC channel, knew of WolfTronix because its website ran on his server, and he pointed it out to Stalking Cat who in turn got in contact with Wolf Tail. The tail was completed in about one month. Stalking Cat was flown out to Wolf's home in Indianapolis by German television station ProSieben, who filmed Wolf giving the tail to Stalking Cat before going on a day-long video shoot around downtown Indianapolis.

Stalking Cat's transformations were estimated by some to have cost more than $200,000,[4] but Cat himself lost track of the expenses. He had planned to have implants inserted into the top of his head so he could attach cat ears. 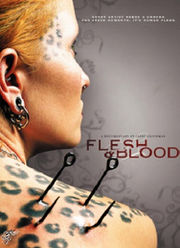 In 2000, Stalking Cat attended a furry event at a science-fiction convention, where he "felt comfortable with other people for the first time".[6] He regularly attended conventions, and was the fan guest of honor at RainFurrest 2007. He was the Cabaret Lead at Califur 4 (2008) and Califur 5 (2009).[35]

In 2002, Stalking Cat's website was reviewed on episode #124 (May 26) of the Funday PawPet Show.[28] Cat phoned in to the show, and, after a brief interview, played their quiz "So You Want To Win Nothing And Like It" and fielded questions from the audience.