Stalker (Ethan Stalworth) is a character in Extinctioners, and made his first appearance in issue 13. 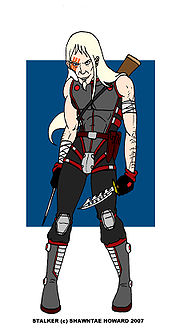 Ethan Stalworth wasn't hired to be part of the initial Keeper team for any type of scientific background. Pure and simply he is a hunter. His is a trained field tracker and killer and he enjoys his job, a lot.

While many high tech weapons are at his finger tips, he prefers using low-tech hunting tools to capture his prey. Particularly knives and long range rifles. Many of his fellow Hunters believe he is crazy, a reputations well earned, and it's no wonder he was partnered up with the humanimal Tracker, Lynx Wylde, because both have personalities that compliment one another.