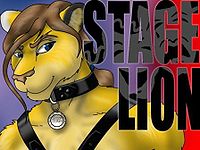 Stage Lion is an African lion cub who is a resident of Buffalo, New York, U.S.A.

Stage Lion is into theatre and takes part in various productions. He uses his baritone voice for musicals. He has stage combat training in unarmed and rapier battles, and is also trained in puppeteering.