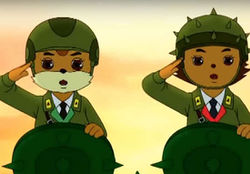 It is well-known[citation needed] for a number of scenes with graphic violence, including deaths of characters by shooting or martial arts, and for its propaganda content.

The series follow a conflict between communities of anthropomorphic animals. These animals live in factions with Flower Hill, consisting of squirrels, hedgehogs and ducks as the protagonists, and the Weasel Army (mice and weasels)/Wolves' Den (wolves) as the antagonists. Episodes 1-26 fall under the first series while 27-32 fall under the second series.

The show has been discontinued since 2012 and there is currently no news of a continuation. The style has developed over the years and changes drastically at a few points throughout the series.

Internet critics commonly associate this series with propaganda with the citizens of Flower Hill being a metaphor for North Koreans and the enemy forces of weasels and wolves metaphors for Japan and the United States respectively. However, this is never directly stated in the series and the staff at SEK Studios have repeatedly said that this representation is not true. They emphasize that the series is meant to teach love, friendship and patriotism to children.[1]

The first season follows Geumsaegi and Juldarami, two Flower Hill squirrels that infiltrate the ranks of the weasels and mice to act as a secret agent by pretending to be field mice. They initially wear white masks as a disguise, but by episode 5 it becomes a permanent part of the squirrel design.

Episode 1 is an early old-style pilot episode with a number of differences both in style and plot. The episode is about Squirrel Village relying on Uncle Bear who vows to protect Flower Hill from the weasels and mice. However, when Bear doesn't show up to protect them when the weasels and mice invade due to drinking poisoned liquor given to him by the weasels, the squirrels, hedgehogs and ducks unite to form one army and defend their home. This is the foundation of the series and introduces some characters that will remain prominent as the series progresses.

Episodes 2 and 3 focus primarily on developing a squirrel named Juldarami who, in episode one, was initially held captive by the weasels and saved by the Wild Ducks from an execution site. Juldarami acts and disguises as one of the field mice to get information from Commander Weasel. He fights alongside a hedgehog named Goseumdochi, and together they infiltrate the Weasel Base to gather information on special weapons they're keeping hidden. Episode 4 then introduces who will remain the main protagonist of the series: Geumsaegi. He goes together with Juldarami to "save" the commander of Mt. Rock and earn his trust so they can spy among their ranks. Geumsaegi is the one who goes to General Commander disguised as the liaison officer from Mt. Rock and, after saving the commander's life from a bomb placed in the magazine by the Mt. Rock commander, is appointed as Guard Commander.

Episode 5 implies that some time has passed in the show and Geumsaegi beginning his ascend among their ranks from Guard Commander. Later on, we learn that Juldarami is now the commander of a regiment of the secret "Mole Gun" from episodes 2 and 3. There's a major style change in this episode and stays primarily the same into 26 while improving along the way. A lot commences in this block of episodes and really formulates the plot and lore.

The new series, produced probably from the 2000's, show an improved style of animation and use of CGI. It first is animated in ToonBoom and switches to Flash by episode 29.

After the defeat of the weasel army, the characters have to face the new threat of the wolves, led by Commander Seungnyangi (Commander Wolf), as remnants of weasels and mice keep making trouble. Observing the destruction left over from the Toadstool bombs being turned on the Weasel Army, the wolves make it their mission to capture someone who knows the underground of Flower Hill well to obtain information.

Since the defeat of the weasels, Flower Hill has been enjoying peace, but it doesn't last long when Mulmangcho shows up and steals the information of Flower Hill's underground from Dr. Mole. Juldarami and Geumsaegi come to Dr. Mole and Bamsaegi's (Geumsaegi's little brother) rescue, but Juldarami is shot and wounded taking a bullet for Bamsaegi. Geumsaegi offers to go undercover as Special Aide and try to get among the Wolf Army's ranks, similarly to series 1 with the weasels, to save his friends and baffle their scheme.

The SEK Studios, the North Korean studios that produced this series, has also produced a number of stand-alone short cartoons with funny animal characters. Some of them are part of a large series named the Clever Racoon Dog. Unlike "Squirrel and Hedgehog," they're focused primarily on road safety education, science, sport, summer volunteer work etc.

This series was also dubbed into English by Mondo TV S.p.A as Brave Soldier.[2]