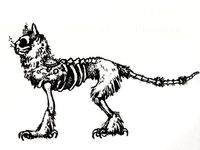 Nameless is an OC of Squeeterbee's, whose outward appearance is that of a skeletonized domestic cat, decomposing with outgrowths of plant life and fungi, reminiscent of a zombie or bog creature. Their purr is generated by a swarm of black flies trapped within their ribcage.

Nameless is the guardian of all feral/lost/abandoned cats that have to survive in the wild. They lead lost souls home. They collect the ones who do not make it, guide them to the afterlife (Tenth Life), and help return their bones to the earth in peace. Nameless is a forest spirit who lurks just beyond sight, at the edges of human perception. The hallmarks of Nameless's paranormal presence include the flash of unearthly eyeshine in the woods beyond the shoulder of a highway, or a cat walking by suddenly stopping short, listening, and staring off intently into the middle distance at something unseen, before walking on.

As a cat guardian, Nameless remembers the warmth of 1000 favorite patches of sunlight on the carpet, the press of countless fingers carding through fur, the flicker of a million small excitements chattered out at birds behind glass, and the taste of dozens of brands of kibble.

Nameless in fursuit form debuted on Tumblr in spring, 2015, and made their first convention appearance at Anthrocon 2015.