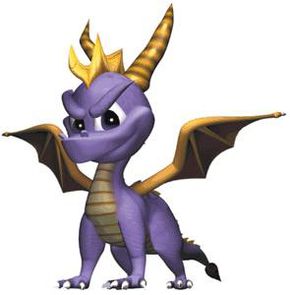 Spyro is a purple Dragon with small wings, large, curved horns, and a spiral-shaped spike on the tip of his tail. He is smaller than most dragons, a characteristic that aids him in the first game. In the original series most dragons are depicted as mainly bipedal but Spyro is depicted as quadripedal.

Spyro is energetic and curious, with little regard for his own safety. He is also described as a courageous hero, despite his small size. Spyro is also known for his cocky attitude. The Legend of Spyro trilogy features an alternate incarnation of Spyro. In the trilogy, he is described as a compasionate young dragon, always willing to help his friends and strangers with whatever problems they may have.

Insomniac Games, also responsible for Ratchet & Clank and Resistance, created the character, and developed the first three games in the late 90's. However, in search of more independence as developers, they left the franchise in the hands of Universal Interactive. Ever since that step, the production of subsequent Spyro games have never been smooth. Season of Ice and Season of Flame (by Digital Eclipse) for Game Boy Advance were well-received by fans, but Enter the Dragonfly (by Check Six Games) for PS2 got unanimously bad reviews from fans and critics alike, for all sorts of reasons: from gameplay, to graphics, to writing, to game-breaking bugs. A Hero's Tail released later was better received, but nowhere near the level of the original trilogy.

In 2006 the franchise got renewed with the release of The Legend of Spyro: a New Beginning, which formed the first part of The Legend of Spyro trilogy. It was followed by The Eternal Night and ended with Dawn of the Dragon. These games have their own separate continuity. The first two parts were developed by Krome Studios, while the last one by Étranges Libellules.

In 2011 the Spyro franchise got rebooted yet again, with Skylanders: Spyro's Adventure. Curiously enough, this is the first game in the franchise with Spyro not being the main character, but rather one of the many "Skylanders" in the player's army.

In 2018, the Spyro franchise would receive a rejuvenation in the form of a remaster collection called Spyro Reignited Trilogy. These games are notable for having redesigned characters, with the best example being the dragons Spyro would free in the first game.

The furry community used to mainly revolve around the Legend of Spyro trilogy but grew to expand into another category once news over Spyro Reignited Trilogy and photos on the redesigns began to spread across the internet.