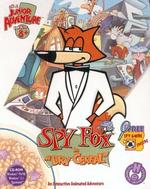 The cover to Spy Fox in "Dry Cereal"

Spy Fox is a fictional spy character in the Humongous Entertainment children's video game series. He is an anthropomorphic red fox who works for a spy company called Spy Corps. His cohorts include Monkey Penny, Professor Quack, and the four-armed tracking bug, Walter Wireless. Spy Fox's personality is a mix between James Bond and Maxwell Smart. He is voiced by Robert Zenk in the series.

Spy Fox has currently starred in five games, with the last being Spy Fox in "Operation Ozone" which was released in 2001. As of now, there are no known plans for any more extensions of the series.