This is not the same person as the similarly-named Spuug.

SPUG is a fur from Texas, USA but she lives in California now. She has had two fursonas, earlier a blue cat, but now a brown mouse.

Jigen from Lupin III as a lion

Spug is most known for drawing gay furry art of well known cartoon and animation characters such as Lupin the third and Batman. She has a few sites, including Maturation, The Dark Darkwing Duck comic.

Spug can eat her goddamn sandwich!

To the contrary, her male fursona, Spud is a racist skinhead, and a Zombie; while he is meant to offend, most fans have taken to loving him. 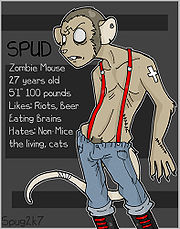