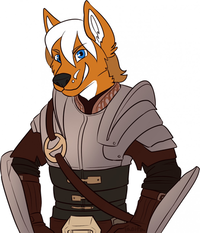 Sprrigs became a furry in 2010 after being inducted into the Sonic fandom, he remained a closet furry for a extended amount of time untill being introduced to Majira and his YouTube content, afterwards he made accounts on Fur Affinity, Twitter, Telegram, and a few more websites.

Sprrigs was born on the eastern coast of North Carolina in the town of Swansboro, in 2007 he moved to Florida, eventually moving back to Swansboro in 2014.