Spotty aka STC (Spotty the Cheetah, born 1988) is a furry artist who resides in Vladivostok, Russia. He best known for his anthropomorphic snake character Shandi. 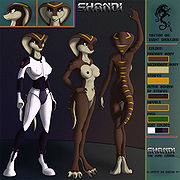 Shandi is a female King Cobra anthro. Her first character sheet was made in July 2007, and as Spotty's style changed, so did Shandi. She has been described as becoming more voluptuous and muscular. In December 2008, the sketch for her new charsheet was revealed, and the final version was released the 1st of February.

According to her new charsheet, Shandi is 26 years old, bi-sexual, stands 186cm tall when digitgrade, and 175cm while plantigrade. She weighs 70 kilograms, possesses an F-cup, and her likes include muscle cars and bondage.