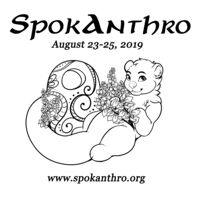 SpokAnthro is a furry convention held in Spokane, Washington, USA.

SpokAnthro was founded in November 2017, when the previous Chairman, Lemnius Gryphs, the vice Chairman, Syberwolf (not to be confused with Syber) and the former chairman of All Fur Fun, Moorcat, pitched in a few ideas along with early staff members. The news was later brought to members of Inland Northwest Fur Folk.

A few months later, SpokAnthro made the public announcement through their Twitter and Facebook stating that they are official, with the convention to be held at the then Hotel RL, which was a Red Lion establishment. Later on, their ideal and the original hotel were bought out by the Davenport and became Centennial Hotel Spokane. In light of the hotel is under a new banner, the initial contract for SpokAnthro, as well as for other planned events from other parties, was eventually canceled from the hotel due to the reasons of renovations.

Shortly after, SpokAnthro found a new venue at the historical Red Lion hotel; Red Lion River Inn, just down the street from their original planned venue. This was subsequently bought out as well and became Ruby River Hotel, but remained in use.

The convention's mascot is a River Otter named Slate.

The inaugural convention was held on August 23-25, 2019. This was the first furry convention to be held in Spokane since All Fur Fun in 2009. 348 furs attended the inaugural event. [1]

SpokAnthro's second iteration was originally to occur on July 24th through the 26th, 2020. However, in regards to the COVID-19 outbreak and for safety purposes of attendees and staff, SpokAnthro was canceled for 2020.[2]

With the cancelation of SpokAnthro 2020, and due to the COVID-19 outbreak, it was revealed through social media that SpokAnthro originally had plans for 2021; keeping the same theme and guest of honor. No specific date was set, but it was originally aimed for late July or early August. However, due to increasing numbers of COVID cases in the area, as well as hotels not accepting contracts, SpokAnthro has been postponed to 2022 instead.