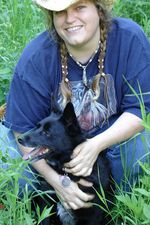 "Goldenwolf and her dog, Freya"

Goldenwolf was born on California, USA. Her parents did not stay in California long, moving to (then) West Germany for a few years, and then to Southern Utah where she lived off and on from Kindergarten onwards. She has been drawing since she could hold a crayon, drawing crude unicorns at first, then dragons, and finally wolves and werewolves when she was out of High School.

She has always been into fantasy and animals, and has always been fascinated by werewolves and shapeshifters. It was only natural that when she was introduced to roleplaying in her 20s that it took a strong hold on her. The game with the most influence for her was White Wolf's Werewolf: the Apocalypse where someone could roleplay a werewolf, but a werewolf that was very mystical and spiritual, tied to the mother Earth, nature spirits, and the cosmos, and fight the evil corporations and forces that were bent on destroying the world.

The world this game brought to life consumed her and she spent all of her time in the 90's roleplaying, storytelling, and drawing her characters, other people's characters, scenes from the game, and werewolf art in general. This was the beginning. 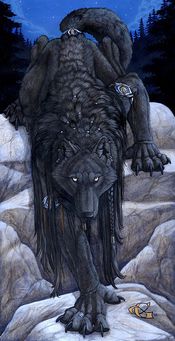 "Eyes of the Night"

Goldenwolf made her first brief appearance online in 1996. She submitted a very few of her werewolf images to "Bender's Werewolves in Suburbia" and had a very small gallery of about three pieces there. However, lacking the necessary equipment and resources to get her artwork online properly, she left the internet in frustration. She returned again to the internet in early 1999 where she came across "RS Creations Werewolf Pages" and began meeting other therians.

She was told at that time that it was preferrable to have a "handle" or a fake name when dealing with the internet, so she randomly chose the moniker "Goldenwolf" because she is blond and it sounded neat. Not long after she was contacted by Gre7g of Temple of Luna who brided for her artwork with a computer hard drive. This was Goldenwolf's first online gallery.

Not long after she moved in with Gre7g in Lenexa, KS to begin a business collaboration. Together the two began creating Wolfhome, a 2D web-based graphical chat. Gre7g did the programming, and Goldenwolf did the artwork. They were later joined by Underdog to assist in the programming and development. Soon after Wolfhome became public Gre7g started dating Kyoht and moved her in as well. Goldenwolf and Kyoht became fast friends. Thus the beginning of the House of Were.

In 2002 the household moved to Cedar City, Utah and were joined at that time by Goldenwolf's boyfriend at the time, Mitternacht, and their friend WolfmageX. Goldenwolf and Mitternacht were married in 2003 and moved to Colorado in 2004. They later split in 2006 due to irreconcilable differences.

Howlapalooza was a large howl started by Goldenwolf and RedPaw back in 1999 as a private gathering of their friends and packmates. This howl was invite-only and featured camping and hunting in Utah's wilderness. There was some outcry over the flaunting of the invite list, as people felt excluded from this private event. After the hunting photos were uploaded, some anti-hunting furs railed against that as well. Soon Goldenwolf and Kyoht started up Spirit Howl as an alternative howl that would focus on spirituality, and allow new people to attend. HOWlapalooza ran from 1999 to 2003.

One of her paintings, Eyes of the Night, was sold for $10,000 USD to a local appreciator of furry art at Further Confusion 2004. This is the currently highest selling piece of art within the fandom to date. 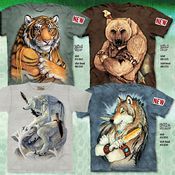 At that time that she sold "Eyes of the Night" she met a fellow artist Sandra SanTara, and they hit it off immediately. Sandra had been selling her artwork professionally in the science fiction/fantasy circuit for twenty years and saw the direction that Goldenwolf could go. After splitting with Mitternacht, Goldenwolf moved in with Sandra in her house in Boulder, Colorado and Sandra began showing her the professional ropes, taking her to Renaissance Festivals, Sci-Fi/Fantasy conventions, Anime conventions, Art and Gift shows, etc. Goldenwolf was very well received at these venues and began focusing on these to further her career as an artist and to broaden her horizons.

With Sandra's careful tutelage, Goldenwolf, who was by now simply known as "Goldie", began garnering attention not only online, but from businesses and other professionals. She was contacted by the Art Director/CEO of "The Mountain" T-shirt company in 2004 to license her artwork on their t-shirts. She happily agreed, and soon Vantage Point, "Eyes of the Night", and her wolf tribal were gracing the fronts of The Mountain's signature tye-dye T-shirts. In 2010 The Mountain commissioned her to create an exclusive design for them, "Golden Feather", and they additionally picked up "Tiger Portrait" and a new piece of hers, "Bruin". As of 2011 "Vantage Point", "Golden Feather", "Bruin", and "Tiger Portrait" are popular T-shirt designs. At the same time as she was commissioned for "Golden Feather", she was asked if she wanted to participate in a deal with Wal-Mart. She agreed, and Wal-Mart began carrying her "Vantage Point" T-shirt in January 2011.

In the Fall of 2010 she was approached by New Remote Productions in Atlanta, GA about using her artwork on MTV's upcoming new series "Teen Wolf". She heartily agreed, and the studio then asked for a custom piece for use as a pivotal prop in the pilot episode. She created "The Wolf's Bride" for MTV, which was used in the Teen Wolf Pilot, Part 2. Other artwork was seen briefly in Teen Wolf Pilot, Part 1.

Goldie lives with Sandra, now in the East Mountain area of Albuquerque, New Mexico where they moved to in 2011 (after living briefly in Rapid City, South Dakota). The two have created a joint company, Wolfsisters Creations, under which they travel and sell prints, t-shirts, and art jewelry at art shows.

Started by Kyoht and Goldenwolf in 2003, Spirit Howl was a semi-private howl that took place in Southern Utah, focusing on the spiritual aspects of therianthropy. The first Spirit Howl was held in September of 2003 near Bryce Canyon National Park in Utah, and was attended by thirteen people, all strangers (for the most part) and all therianthropes who became fast friends after the event.

The next year, Spirit Howl was held at the same place, though not all the original members could attend. The 2005 Spirit Howl was a reunion of sorts, but by that time both Goldenwolf and Kyoht had changes in their lives and neither had the time or energy to devote to the 2006 howl.

Goldenwolf sent in her application for Further Confusion 2008's art show too late to get confirmed space, and was put on the waiting list. She did eventually get some panels due to last-minute cancellations.

Ch'marr told Goldenwolf she was too late in an email which she shared with her friend Sandra SanTara. Sandra sent an email of complaint to the entire artshow staff (possibly by accident). Both emails were leaked, and subsequently published by Squnq. Sandra's response - particularly her argument that "pro" artists should not be forced out by mere timing, but should have space reserved subject to a jury of artists, like some science-fiction conventions - was received poorly by many furry fans, although some were partially supportive of the idea.

Goldenwolf responded to the public debate with a post supporting Sandra's arguments, and suggesting that the choice was between being "mediocre but fair" or having an "outstanding" art show which would "draw in those who will really spend". Meanwhile, Sandra criticized members of the furry fandom who supported the publication of her email, and those who had leaked it in the first place.[1]

Either Sandra or Ch'marr subsequently sent LiveJournal a DMCA takedown notice, demanding the posts containing the original email and response be removed on the basis of copyright. On 3 February, Squnq indicated that he had filed a counter-claim, but that LiveJournal's policy dictate that his post containing the email remain hidden until the opportunity for a court case expires.